I began to embrace the KonMari method of decluttering back in the winter, after reading one of Marie Kondo’s books and watching her brief but uber-popular Netflix series Tidying Up.

I learned to fold like a pro, transforming my sloppy T-shirts, pants, and underwear drawers into happy, organized things of beauty. Gone were piles of shirts of all sizes, shapes, and colors smothering one another. In their place are uniform rows of items folded the exact same way. Now when I open my T-shirt drawers (one for short-sleeved tops and the other for long- and three-quarter-sleeved shirts) I can spy with my little eye everything I own.

I also attacked my closet and kept what sparked joy, of course, and discarded what didn’t. I KonMari-ed my bookshelves too and finally freed myself of all those small-type, yellowed paperbacks from college lit classes that I just “knew” I’d read again and again but never did. Goodbye, Sister Carrie. So long, Madame Bovary. And take David Copperfield with you too, please.

I attempted to free the house of DVDs as well, but this is one category I’m stuck on as I visualize my future grandkids popping in Toy Story, Finding Nemo, or any one of the Harry Potter series. I have no grandchildren yet, and all my own kids are no longer that. So the DVDs from their childhood sit idle on the shelves these days, except, of course, at the holidays, when  Charlie Brown and Linus as well as the Grinch come to life once again.

As for the adult DVDs, there are a handful I’ll watch again and again. Sleepless in Seattle, Dan in Real Life, and Steel Magnolias come to mind. But since I love these films as much as I do, of course I’ve purchased digital copies from Amazon, making them accessible anytime on every electronic device imaginable.

So why then do I hang on to the DVDs? I could argue that the boxes’ art and descriptions are as cherished as the films themselves, kind of like album covers of old. Or I could say that they don’t take up much space at all since they’re so thin. Okay, these are reasonable arguments for hanging on to the greats, but what about all the rest?

And more importantly, why am I adding to the collection? 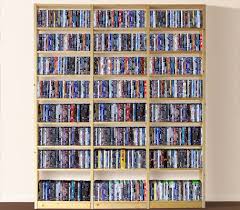 That’s right. Since quitting my library job in December, where thousands of DVDs were at my fingertips, I have been going to thrift stores and book sales at neighborhood libraries and purchasing not only books I’ll likely never read, but DVDs too, many of which I have already seen or, like the books, will never take advantage of. But there are some movies that I was very fond of in the past and hadn’t seen in so long that I just had to have a copy. I’ve watched a few. Roxanne, for one, was as good as I remember it; Say Anything, not so much.

My daughter who tends to be more like her dad in the clutter department suggested I purchase the movies, watch them, and re-donate. What a great, practical idea! If only I could. I’m afraid once the Terminator has entered the building, there’s not much I can do to make him leave. I’ve thought of reselling my DVDs on Craigslist or eBay or etsy, and I may do this with the duplicates because–woe is me–there have been times I’ve purchased a second copy of a movie I had just bought a few weeks back, not recalling whether I had it!

Anyway, they are slim, they’re good for a couple hours of entertainment, and they’re cheap. Some things, Marie Kondo will agree, are worth keeping because they spark joy again and again.

Poll: If you were stuck on a desert island, assuming there was electricity and plenty of shade and popcorn, which movies would you bring with you (chances are I have them on my shelves)?