I love flipping through home decorating magazines and watching every show on HGTV (except the ones with the “property brothers”–just can’t get into those guys) and I want my house to look like the ones I see on those pages and in those series, but there’s something holding me back. And it’s this . . . well, this and about $90,000 in cash: I am not neat and tidy enough to keep a house looking that way.

I have good intentions and occasionally the motivation necessary and I’m nowhere near ready to be featured in an episode of Hoarding: Buried Alive, but I just don’t have what it takes to get the house immaculate and then keep it that way. I often choose to think that I’m too busy or that I have more than the average number of kids (four vs. two), but it’s not those things either. I have a friend who has just as many children as I do and her house is spotless. And I follow a TV series of a family with five children and the mom keeps her house very neat and clutter free. So it can’t be just the number of children that makes the difference. I also want to believe that my house isn’t big enough, that there aren’t enough places to store everything, but I know people with smaller homes that are super tidy. So it’s not that either. 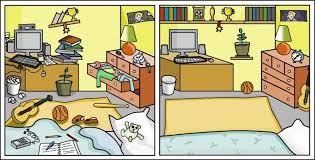 I have come to believe that it’s something inborn–you either have the tidy gene or you don’t. My husband is tidy, as was his father, but his mother was not. I have to believe he inherited the trait from his dad. I came from a family whose mom was neat and clean but whose dad accumulated stuff and didn’t want to throw things out for fear he’d need them someday. His mother, my grandmother, was the same way and now my sister and one brother are similar. My oldest brother is just the opposite, however. He’s never accumulated junk, has no problems parting with old books, baby items, or Boy Scout badges. He enjoys things when he has them, knows when they’ve run their course, and can easily part with them as need be. And he’s thrifty too, so it’s not that he just throws stuff away willy nilly. He can and will sell anything possible, which is a motivator, I suppose.

I’m somewhere between the super-neat brother and the one who asks grocery stores for their banana  boxes (because there sometimes is a need to store heavy items stacked to the rafters, apparently) and the sister whose every tchotchke she’s ever brought into the house is displayed on the fireplace mantle, the coffee and end tables, the shelves, the back of the couch, the kitchen counters, the dining room table, the beds . . . you get the picture, I’m sure. So if there is no “neat gene” or “inherited tidy trait,” then how do you account for the variations in my own siblings who came from one neat parent and the other not so much?

I guess we can’t all be good at everything. The friend with four kids with the spotless house, she hates to cook and refuses to do so. The mom on TV seems to feed her family well enough, but admits to not loving cooking. Meals don’t look exceptionally creative. These women are also, one, an occasional part-time worker and, the other, a stay-at-home mom, meaning they’re able to put their superpowers to work with the adequate time they have. But my messy sister and brother have plenty of time on their hands too. They choose to use their time in other ways and are OK living among the messes.

Me? Well, I can and do cook well and often. I also work a lot of hours and have been the full-time parent and in charge of most home repairs, renovations, and upkeep, so time is tight, but I realize that’s just an excuse. I think I may have inherited both genes from my parents–the tidy and not–and I’m just being pulled toward the less-enthusiastic-housekeeper gene.

I have read about and noticed some things neat people do, namely they don’t accumulate stuff and can easily let it go. If it doesn’t have an immediate purpose, it’s out of there. I want to get to that point of knowing I won’t miss it once it’s gone.

I love the feeling of freedom being on vacation gives, when you’re unable to carry around anything that’s not immediately necessary for the duration of the trip, anything that is the baggage of life, so to speak. A carry-on will do. I’m pretty good at packing economically, so I think I’ll take that feeling and run with it for the rest of the year. By the end of this experiment, I’m hoping my home looks more like House Beautiful than Collector Magazine.