I went to the movies last Friday. This is not unusual. I try to get out to see something good every month or two or more, depending on the movies that are playing. There have been dry spells in which nothing to my liking was playing and there have been times when I have the pick of the litter.

This past week a new batch of films came out but the one I wanted to see had been in the more arty theaters and was now in widespread release. It was Hello, My Name Is Doris, with Sally Field and Tyne Daly. It was appealing to me because of the quirky lead character and a story line I could get behind. Doris is a sixtysomething, single, working woman with some issues. She lives alone now that her elderly mother has died and because she had never moved from the house she grew up in, she has a huge attachment to what it is, what it’s meant, and what belonged to her mother, which has resulted in a hoarding habit. Because she lacks social awareness (which reminded me of someone I’m very close to, by the way), Doris falls for and fantasizes about a life with a new young executive at her workplace when she mistakes his kindness for something more. 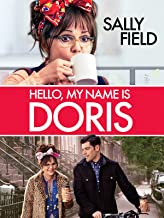 The movie got great reviews and with Sally Field at the helm I expected there to be some people in the theater with me (yes, I have at times been the only one there!), but I was taken aback by just how many folks came out to see this film on a day with much more popular movies hitting the theaters for the first time, namely The Boss, with Melissa McCarthy (which I’d like to see; I’ve been a fan of hers since Gilmore Girls),  and others that have mass appeal, like Batman vs. Superman. I had to move over twice so my row could accommodate additional people. It was a smaller theater, but every row had at least ten people in it and some folks were forced to sit in the rows closest to the front.

So who was in the audience at this matinee? Mostly older people, either couples or senior women in groups. I thought it was telling that a movie with a longtime revered actor like Sally “You really do like me” Field, as well as a grown-up story line and some humor and warmth, can sell tickets. Hyped-up, big-budget fare like Batman vs. Superman, which got mediocre ratings, or the new Star Wars film, which is supposed to be good but which I’ve yet to see, are not the only films that will draw in viewers. And sure, the majority of filmgoers last Friday at the Doris screening did not fit into the typical 18-35 age group, the group that advertisers love because they’re the big consumers, but that’s my point exactly: If studios make mature, good films, they can bring out a wider audience and sell those precious tickets. And that’s refreshing news.

2 thoughts on “if you film it, they will come”